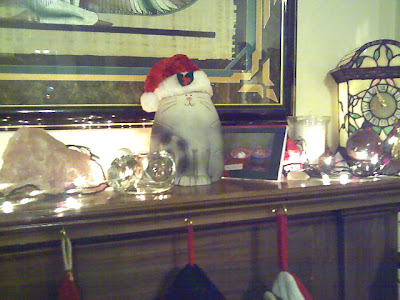 Even though some things are not nice at all (like Miles bein sik and Mommy havin a messed up knee) Chrissymouse is coming and dat's a good thing! Even if we forgotted Boni's Squillion Mac is a'minding us.  See? He has his Chrissymouse hat on. And he's sittin next to our card from Eric and Flynn.  Grandma Cat is jealous cuz she says we cats are gettin all the Chrissymouse cards hehehe But we showed her that they're to the Hotties and she's a Hottie too. A'course she is, cuz she lives at the House of the (Mostly) Black Cats also! So there Grandma Cat, yoo are gettin lots of Chrissymouse cards too!

Yoo know what it means too that Chrissymouse is coming? It means it's almost time for our big Chrissymouse Eve Party! We has one efurry year (this is the third yeer, I fink) so that cats who doesn't have fambly to hang out wif or doesn't cellybrate Chrissymouse has furriends to hang out wif!  And a'course cats wif fambly are welcome to come hang out too when they's done wif fambly things or if they aren't doin them til Chrissymouse day.  The party will be Chrissymouse Eve in the CB Chatzy room from 8pm EST (7pm CST, 6pm MST, 5pm PST) til the last cat goes home.  So mark it on yore calendar in case yoo needs a plase to party. It'll be fun! It always is :) 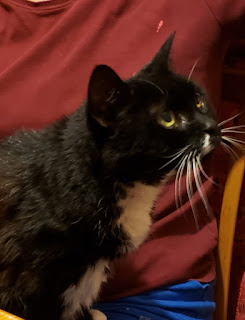 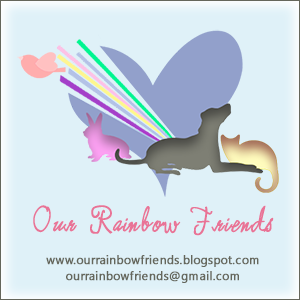